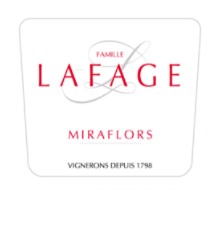 For well over a decade we have worked with Jean-Marc Lafage at his estate in the Roussillon, and across the border in Spain where he consults on several projects. As good as his wines were, when we first met him, they only get better with each vintage. When we first made his acquaintance in Calatayud, he suggested we visit his estate in the Roussillon and the rest, as they say, is history.

Jean-Marc and Eliane Lafage farm 160 hectares of vines located just south of the capital of French Catalonia, Perpignan. Some of their vineyards are situated a few kilometers from the Mediterranean, while others can be found in the foothills of the Pyrenees. This range of sites allows them to make both refreshing whites as well as concentrated reds and, this being the Roussillon, some fortified wines as well. Benefiting from a warm, dry climate, the estate is farmed organically. They grow primarily Grenache (Blanc, Gris & Noir), Syrah, Mourvedre, Carignan, Marsanne, Roussanne and Chardonnay with a significant proportion of the vines well over 50 years old. The soil, as you near the coast is weathered, alluvial gravel while in the higher elevation sites it is predominantly schist. They harvest by hand and the winemaking is surprisingly uncomplicated with stainlesss steel for the fresher whites but mostly concrete tanks for the rest with a small amount of French oak demi-muids.