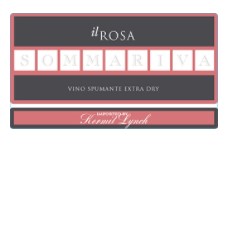 For several generations the Sommariva family worked the vines on the high plains of the Veneto, growing a mix of French and local varietals and selling off most of their crop as was common practice at the time, but it was Caterino Sommariva who pinpointed the slopes as the best place for vines and began purchasing hillside vineyards together with his wife Urbana in the 1970s. The couple also had great faith in the Prosecco variety (now known by its historical name, Glera) and decided to plant it exclusively on their new property, which gradually grew as they continued to snatch up adjacent parcels over the years. This great foresight put them in a very advantageous position when Prosecco and the hills of Conegliano and Valdobbiadene began to gain recognition in the late ‘80s for the light, clean sparkling wine we know so well today. Caterino and Urbana’s daughter Cinzia remembers watching her parents work and thinking as a child how hopelessly difficult the harvest seemed; so she chose another path in life and pursued studies in marketing. As she got older, though, she regularly returned to the estate and began to see her parents’ work through different eyes, slowly discovering her own passion for the hard work of winemaking. She eventually joined them and has since become a dynamic and enthusiastic partner in the estate.